What Do You Want to Be When You Grow Up?: Photo Series Encourages Refugee Children to Pursue Their Dreams – StoriesAddict 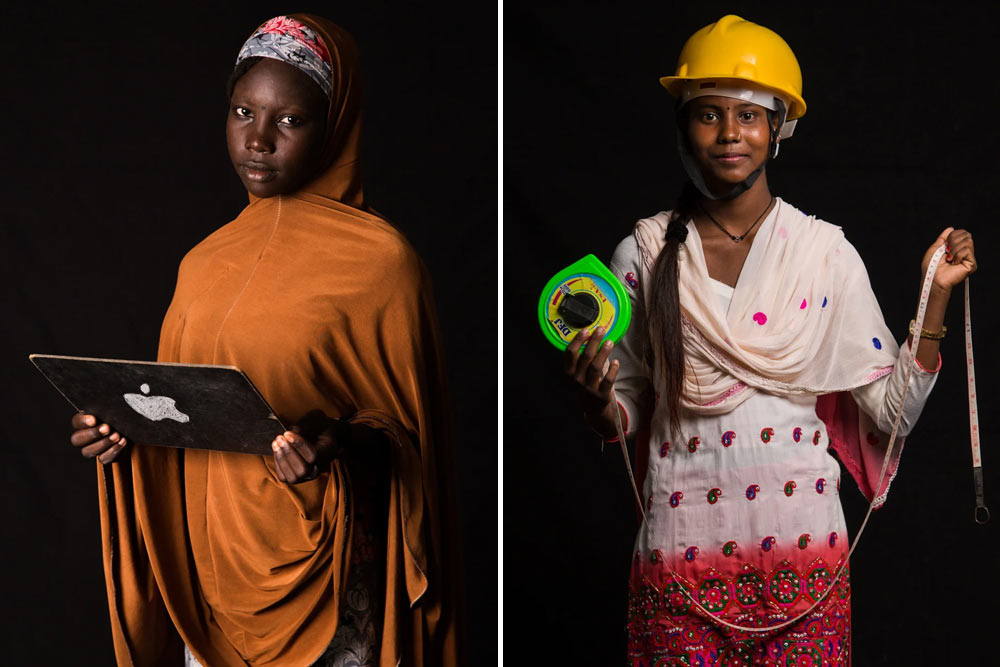 For the less fortunate members of this world, every day presents its new set of trials and tribulations that require a lot of stamina to overcome. This idea can certainly be applied to the refugee children of the Central African Republic. In order to use his job in the most humanitarian way possible, one Frenchman decided it was up to him to change things around.

After paying a visit to a displaced Muslim community in 2014, photographer Vincent Tremeau was astonished to witness these people struggling to ever step foot outside of a church, in the fear of getting caught. Keen to inject some life back into these youngsters, Tremeau started his famous “One Day, I Will” project, and equip these children with ambitious dreams!

Without further ado, let’s run through the background information of this amazing project. Based in Dakar, Senegal, Vincent Tremeau uses his camera skills to capture humanistic issues, and raise global awareness for each and every case. One of his most celebrated photography missions involves giving children in refugee camps a new lease on life.

After coming into contact with the African refugee children, Vincent experimented with the ways he could help put a smile on each of these kid’s faces. For the photographer, it was important to focus on the future goals for these children, rather than dwelling on their pasts. It wasn’t too long before an idea finally came to mind.

The Most Inspirational Game of Dress-up

Cue the famous “One Day, I Will” project! In the beginning, Tremeau had no idea whether this photography mission would amount to anything, but he knew it would be a lot of fun. With each unique case, the project starts with Vincent asking each child one simple question: “what do you want to be when you grow up?”

Once he gets an answer, Vincent asks the children to create a uniform for the chosen career. So, what do all of these inventive photographs amount to, in the end? A collection of moments that provide underprivileged youth with new dreams, new ambitions and new hopes for the future. We couldn’t commend Vincent enough for his great help.

Bigger Results Than He Ever Dreamed of

Here’s where this project gets emotional. As we mentioned, Vincent was unsure whether his “One Day, I Will” project would create much of an impact, but the results amazed him! Tremeau was astonished by not only the originality of every children’s professional dream but their ability to create such remarkable costumes out of very few materials.

Keen to expand on these fascinating findings, Vincent took his “One Day, I Will” mission to new African countries. It wasn’t long before the photographer began drawing conclusions: most of the children’s aspirations were based on their environments. For example, Congo has experienced years of conflict, which is why many children here dressed as soldiers.

Getting His Photos Out in the Open

Vincent Tremeau really is something special. Rather than using his photography job to merely capturing a pretty picture here and there, as we’ve mentioned previously, the Frenchman wants his work to inspire positive change in the world. In an attempt to increase public protection of these refugees, Vincent’s work showed up at some pretty big places.

Where exactly could people get a close-up look at these shots? According to recent news, Vincent’s “One Day, I Will” photographs feature at the UN Visitor’s Lobby, as well as their Headquarters from July 27th to September 9th. If that’s not a huge compliment to your work, we don’t know what is!

Vincent’s New Goals for the Future

As we’ve now shown you, photographer Vincent Tremeau likes to base his work around African countries, focusing on young individuals who struggle to obtain a decent education, but now he wants more! Keen to focus on a new side of the story, Vincent has plans to travel to completely new parts of the country to continue the “One Day, I Will” mission.

Why exactly does Vincent want to expand out of Africa? To gain a new perspective on the images, and highlight a contrast between existing inequalities. Alongside this, Vincent the photographer has high hopes that schools all over the globe will hop onto his “One Day, I Will” bandwagon, getting pupils everywhere to open up about their goals. Amazing stuff!