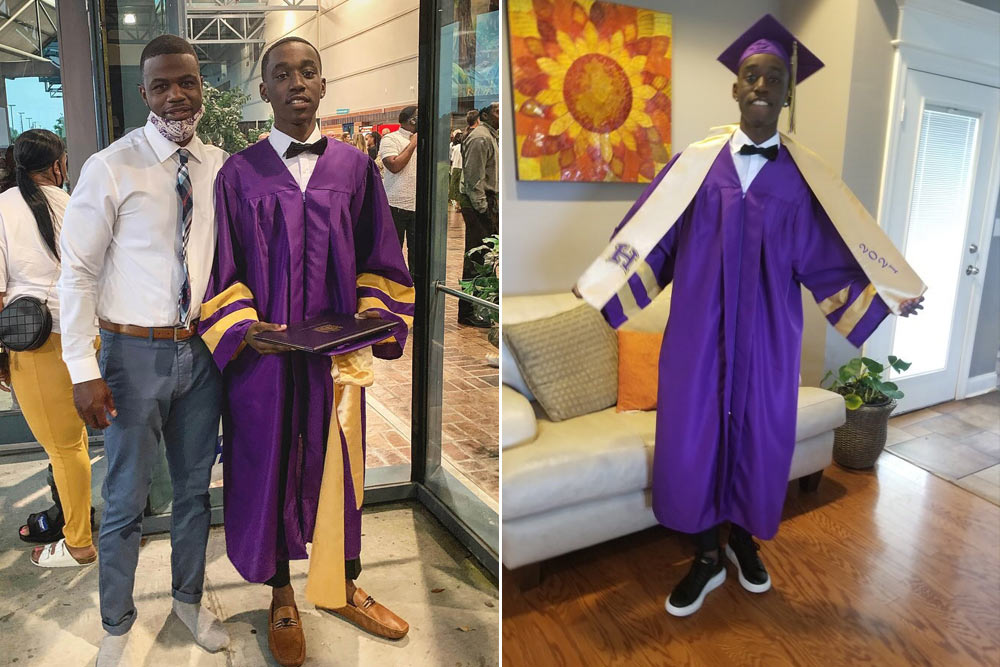 Your high school graduation ceremony should be one of the most memorable and most exciting days of your life. You don your cap and gown, you wait for your name to be called, and you pick up your high school diploma after years of hard work and dedication. And while most people get to shake their principal’s hand without a hitch, others haven’t been quite so lucky.

This was the case for 18-year-old Daverius Peters, a senior at Hahnville High School in Boutte, La. While he was looking forward to the culmination of years of struggles, he was stopped in his tracks when he was turned away from the ceremony. But when his teacher found out, he knew he couldn’t let his student miss out on a once-in-a-lifetime event.

When Daverius turned up to his graduation in his purple cap and gown and assumed that he would be able to walk in the doors without an issue. What he wasn’t expecting was to be told by a school representative that he wouldn’t be able to enter the building. He noted that “She said my shoes violated the dress code and I couldn’t attend the ceremony unless I changed them.” The dress code stated that men could wear dark dress shoes, but not athletic shoes. Daverius had chosen to wear black leather sneakers that had white soles, and he “thought I could wear them because they’re black.”

Daverius didn’t know what to do, and so he began to helplessly look around him in order to understand what was going on. Was he really not allowed to graduate because of his shoes? As he panicked and wondered what he could do to resolve the situation, he spotted a paraeducator by the name of John Butler. He was a mentor to many of the students at the school, but he also had a daughter who was graduating on the same day.

Daverius thought that Mr. Butler would be able to help him, so he ran over and explained the situation. The teacher thought the whole thing sounded “crazy” and that “there was nothing eccentric about his shoes.” He decided to help his student by trying to convince the school representative to let him graduate, but “she insisted on not letting this young man in, and I didn’t have time to go back and forth with her.” So, he took off his own shoes and gave them to Daverius to wear for the ceremony.

Although John’s shoes were two sizes bigger than Daverius, to the teacher it “Was a no-brainer. This was the most important moment in his life up to that point, and I wasn’t going to let him miss it for anything.” And it’s fair to say that the young man wearing his shoes was eternally grateful for his bare feet and the fact that he would be so selfless. Without his teacher, he wouldn’t have been able to graduate, and that meant the world to him.