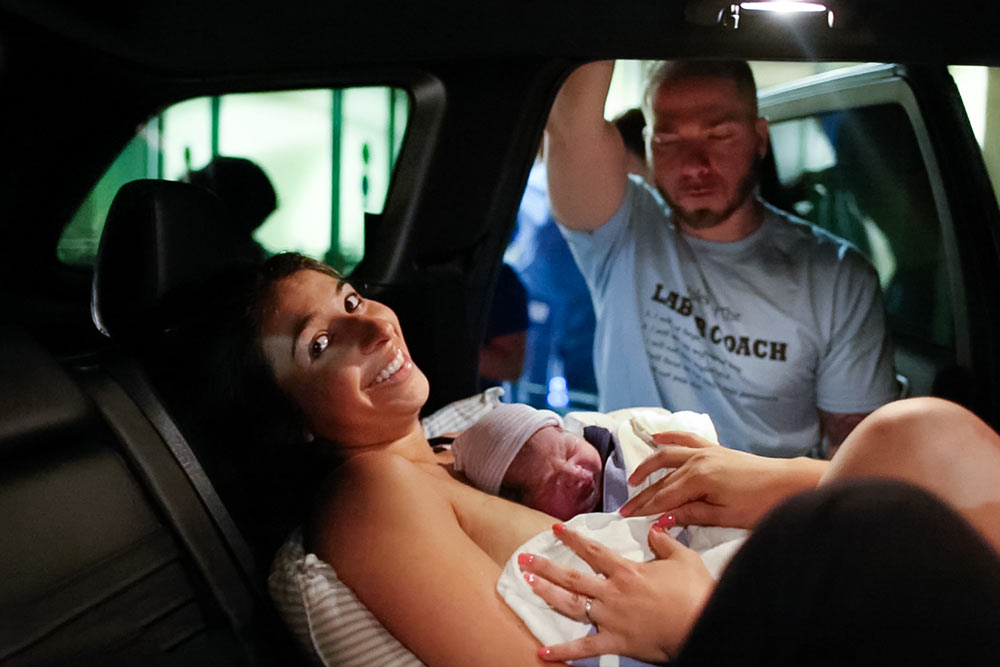 An amazing woman from Briarcliff Manor, New York, has miraculously managed to deliver her own baby in the backseat of a car, completely by herself. Opera singer Emily Geller Hardman is 35 years old and was en route to a family wedding in Lancaster, Pennsylvania, when she suddenly went into labor. She was still two weeks away from her due date, so neither she nor her husband was expecting it.

“The amniotic fluid was clear and there were no contractions,” the opera singer revealed in an interview with Good Morning America, adding “And this was a first-time labor for me. Statistically, most first-time labors are about 16 to 24 hours, so in my head, we had plenty of time.” But as time would tell, that wasn’t going to be the case for this mum-to-be.

Gravity Hit When She Least Expected It

“In my head I was thinking that I’ve been preparing for this for three years, I can certainly do early labor in the car,” Emily told herself. She wasn’t wrong, after all. She just had no idea how much further it would go. “My husband’s driving and the entire time I’m focusing on listening to the app to get me through each contraction,” she explained, unaware of how quickly time was flying by.

It was 5:30 in the morning, and the couple decided to pull over for some fresh air. But that’s when it hit Emily that this baby didn’t want to waste time: “Once I stood up, I think gravity hit and I started bearing down. My water starts leaking again. But I knew that we had to get back in the car and get to the hospital so I willed myself back into the backseat.”

Ready or Not, Here I Come!

Emily’s hand was forced, and she had to give birth then and there. “This baby was coming out of me one way or another,” she said. She decided not to fight it, and do her best to assist the baby. “I could feel myself bearing down and pushing. I instinctively just reached down because I’m feeling so much pressure and I feel the top of a baby’s head starting to crown.” All the while Emily’s husband was trying to pull over to get out and help.

“We’re still driving and her entire body just flies out in one contraction. There was no pushing stage of her head slowly coming and then waiting for the next contraction and resting. It was just a one-shot deal – she just flew out.” Emily says she remembers feeling relieved, and in hindsight calls the traumatic ordeal “a very healing experience.” As far as Emily’s concerned, her high-pressure job as an opera singer probably helped her deal with the sudden birth: “You have to perform at a high level under stress, so you’re used to those types of situations and having to focus on what you’re doing and not how you’re doing.”